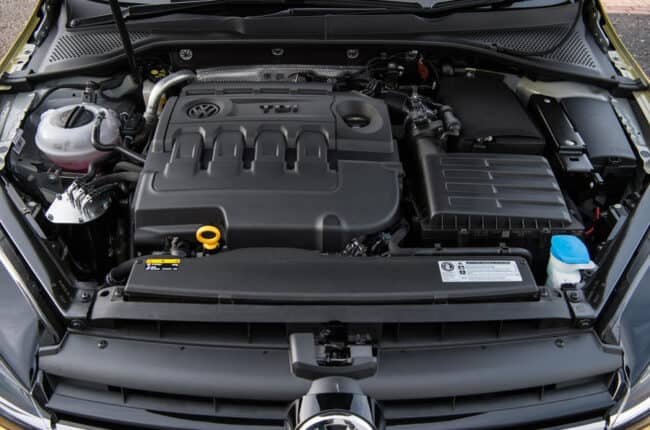 Never heard of an EGR valve before? or are unsure of what it does? We take a look at the best EGR valve cleaners to buy, assess their differences and explain what EGR valves are and how they work.

An EGR valve is an essential component of your Volkswagen Golf engine and can cause a whole host of problems if it isn’t maintained properly. Essentially, an EGR Valve has one purprose, to stop harmful nitrogen oxide pollution from exiting your car via the exhaust system. Once the fuel has been burnt off and used, before exiting the car exhaust system it will pass through the EGR Valve (Exhaust Gas Recirculation Valve). The EGR valve recirculates the gasses and reduces the amount of harmful nitrogen oxide in the gasses before it then get’s released to the exhaust system.

A brilliant idea and technology, but unfortunately EGR valves aren’t plain sailing and maintenance free. Over time they become blocked with carbon deposits which can then cause a whole host of different engine performance issues.

It’s really important that an EGR valve is kept working at it’s optimum performance and to do that, it needs to be clean and free of carbon deposit build up. This is where an EGR valve cleaner comes in and can work wonders for an engine.

Update: June 2021 – We are seeing a huge increase in EGR valve problems on Volkswagen Golf’s over the last 6-12 months. This can be attributed to the fact that we have all changed our driving habits over the last year or so due to the coronavirus pandemic. If you’re working from home and not commuting to your place of work regularly, you’ll likely only be using your car for short journeys for the school run, weekly shopping trips etc. Unfortunately short, infrequent journeys are absolutely no good for modern diesel vehicles and as a result of that EGR valves and DPF filters are becoming clogged up with soot and causing performance problems. To counteract and prevent these problems, our advice would be to frequently use one of our suggested EGR valve cleaners and also take your car for a good blast up and down a motorway or A road as regular as possible. Modern diesels need to be driven regularly and also allowed to get up to temperature in order for all the emissions system to perform at their optimum.

What Is The Best EGR Valve Cleaner for A Volkswagen Golf?

Pushed for time and would like a brief overview of our top pick EGR valve cleaners? Sure, let’s jump right in

Wynn’s Diesel EGR Cleaner 3 takes our top spot and offers exceptional performance everytime. It takes our top spot due to not only it’s excellent performance and cleaning abilities, but also due to it’s versatility. As well as cleaning the EGR Valve, it also cleans and treats the air intake system, airflow sensor, inlet valves, and turbo.

Also, it’ll restore perfect airflow towards the combustion chamber which is a key ingredient for a car engine to run smoothly and efficiently. As well as this, it’ll provides a regular and stable idle.

Other benefits of this product are that it eliminates and avoids starting problems whilst improving accelerating properties. Wynn’s Diesel EGR Extreme Cleaner Is also completely safe for all after-treatment systems.

The key features of Wynn’s Diesel EGR Extreme Cleaner are;

It’s simple and straight forward to use and as well as cleaning the valve on the exhaust gas recirculation system, it also cleans the complete intake system and the intake valves.

JLM Diesel Air Intake & EGR Cleaner restores the air supply to the engine, which improves engine power and acceleration and reduces the amount of smoke from the exhaust. A real benefit to any car.

Holts EGR & Carb cleaner is a professional product formulated to quickly remove deposits caused petrol in carburettors or exhaust gases in diesel engines. By removing the harmful carbon deposits, performance and power is greatly restored and also emissions are reduced.

A powerful solvent formula is able to reduce emissions, restore performance and keep EGR and Carb systems working at their best.

The key features of Holts EGR & Carb Cleaner are;

The key features of Wynn’s Petrol EGR and Air Intake Cleaner are;

The STP Diesel EGR Cleaning Spray offers great performance and superb value for money. Supplied in a 300ml can, it dissolves gum, lacquer, carbon and tar-like deposits from the air intake system. It can also restore air flow and helps unstick EGR valves without disassembly which is a real plus point and extremely convenient.

The key features of STP Diesel EGR Cleaning Spray are;

What is an EGR Valve?

Put simply, an Exhaust Gas Recirculation (EGR) is a method to control Nitrogen Oxides (NOx) emissions which are produced during the combustion process. The EGR system works in principle returning a small portion of an engine’s exhaust gas to the engine’s combustion chambers through the intake manifold, thus lowering combustion temperatures and therefore reducing the amount of NOx emitted. NOx is created and emitted when air and fuel mix inside the combustion chamber and temperatures increase.

NOx stands for Nitrogen Oxide and are emissions produced during the process of combustion. Nitrogen and Oxygen gases in the air react during combustion, particularly so at high temperatures. The biggest concern and problem with NOx is the detrimental effect it can have on human health, it can be really nasty. It’s for this reasons why car manufactuers were tasked with reducing NOx as much as possible and thus created systems such as EGR Valves, DPF Filters etc. As well as having a negative effect on human health, NOx can also cause serious damage to the environment.

How Does an EGR Valve Work?

Modern Volkswagen Golf Diesel engines incorporate EGR valves into their design to reduce NOx emissions and then meet stringent emissions regulations. EGR systems recycle a portion of the exhaust gas back into the combustion chamber, where it combines with fresh intake air.

What Are The Symptoms of a Failing Volkswagen Golf EGR Valve?

Symptoms of a problem with the EGR value are;

Rough or poor idle – Your car may have a rough or inconsistent idle speed when stationery. This could be due to the EGR Valve being stuck in the open position and allowing too much exhaust gas back into the manifold. Conversely, it could also be blocked and not allowing any gas through.

Reduced performance – Your car may suffer with reduced engine performance if the EGR valve is failing or faulty. you may experience a lack of power, particularly when accelerating hard or attempting to overtake. A frequent occurence of problems with a blocked EGR valve is when trying to accelerate up a steep hill, the car may struggle which can sometimes be dangerous.

Stalling – Depending on the severity of the issues with the EGR valve, your car may not be able to maintain it’s idle speed and may stall frequently. Again, this can be extremely dangerous when on the road.

Fuel smell – You may notice an strong smell of fuel, particularly when stationery. This is due to the continuous flow of exhaust gasses being pumped back into the exhaust manifold rather than away from it.

Smoke from exhaust – On a diesel vehicle, you may notice an increased amount of black smoke coming out of the vehicle exhaust. This is due to the problems with the fuel system and the vehicle not being able to remove the exhaust gasses as it’s inteded to do.

Here’s a photo of an extremely blocked up EGR Valve. As you can see, the valve is almost completely blocked with carbon deposit build up and is severely restricting the flow of gasses through it.

Can a Faulty EGR Valve Cause My Volkswagen Golf To Fail An MOT?

Yes, a faulty EGR Valve can cause your Volkswagen Golf to fail an MOT. The EGR valve is an integral part of the vehicle emissions system and if it isn’t functioning correctly, your car is likely to be producing far too many harmful emissions and will fail the MOT on the emissions produced.

Can I Remove The EGR Valve?

No, you cannot remove the EGR Valve, it’s a legal requirement becuase of how dangerous the NOx gasses are to human health and the environment. On modern cars, an engine management light will illuminate if the EGR system is interferred or tampered with. On older cars, it may be possible to blank off the EGR system and the car may not display a warning light. This however is illegal and if detected, your car will instantly fail an MOT.

What Causes An EGR Valve to Fail?

There are a number of contributing factors to an EGR valve failing, it’s important to understand why they occur and how to prevent them from happening.

Short Journeys – Frequent short journeys around town are one of the biggest factors in an EGR valve failing. More prevelant in diesel cars, short town journeys don’t allow the car to warm up to temperature correctly and as a result, carbon builds up in the engine and fuelling systems. Diesel is an extremely oily fuel and produces thick carbon build up when it doesn’t get burnt off. The burning off and cleaning process occurs when the vehicle reaches a specific temperature and the carbon build up is removed.

Low quality fuel – Using low quality fuel can lead to problems with the EGR valve due to the lack of cleaning agents and additives in the fuel. Premium fuels contain additives and a higher cetane rating which cleans the fuel system.

What Are The Benefits Of Using An EGR Valve Cleaner?

Save Money – By using an EGR valve cleaner regularly, you’ll save money in the long run on expensive repair bills. EGR valves are an extremely expensive item and some cars are fitted with two valves, replacing both of them could run into thousands.

Better for the environment – A fully functional EGR valve is a requirement for a modern diesel vehicle to comply with vehicle emission regulations. As we have covered, Nitrogen Oxide (NOx) is extremely harmful for the environment. A good quality EGR cleaner will keep the EGR and emissions system working at their best to ensure that those harmful gasses aren’t released into the air causing harm to the environment and human health

In summary, an EGR valve is an integral part of a vehicle engine and it’s imperative that it’s kept clean and working at it’s optimum. A blocked or faulty EGR valve can lead to expensive repair bills and time off the road for your car. Using an EGR valve cleaner regularly will help keep your Volkswagen Golf free of carbon build up, ensure your car is running at it’s best at all times and also have a positive impact on the environment.