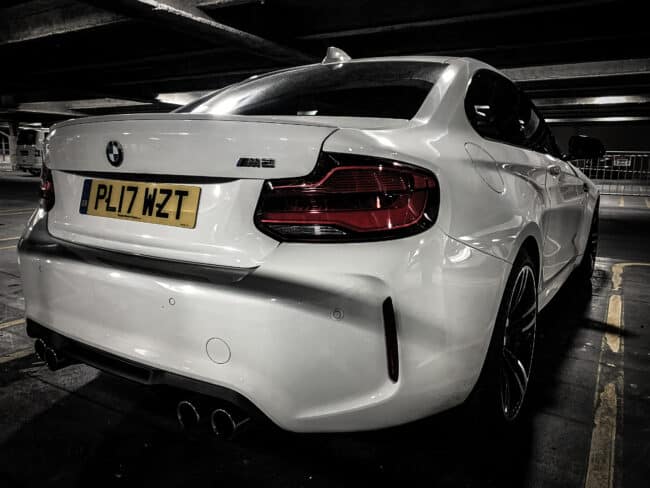 You know when you really regret selling a car? Over the last few weeks I seem to be finding myself suffering from that deep regret more and more, I really miss my M2.

It was a 2017 “OG” (Original) M2, although technically it was the LCI (facelift), finished in Alpine White. It was completely standard in terms of specification, however the M2 is a pretty well specified car I think. It had Harmon Kardon sound, Reverse Camera, Electric Folding Mirrors, Heated Seats, Keyless Start and Stop and much more. However, absolutely none of that matters whatsoever. Let me explain.

The driving experience of the M2 is so phenomenal that it really doesn’t matter what buttons it has or doesn’t have. It really doesn’t, believe me. The engine (N55) is almost like a work of art. The straight 6 turbo charged motor sounds beautiful, absolutely beautiful. There’s something so satisfying and captivating about a BMW 6 pot engine, they just sound so wonderfully balanced and poised.

My particular M2 was an auto model which i’m sure will be the point of some conjecture! True “petrol heads” will that an M car should only ever feature a manual gearbox and whilst I understand that, I don’t particularly agree. The DCT transmission in M2 was mightily impressive. Around town it used to slosh gears together relatively seamlessly and didn’t make much fuss about pottering around at low speeds. When you wanted to press on and really drive the M2 hard, the DCT really came alive. Paddle shifts via either the steering wheel paddles or gear shifter itself were absolutely lightning quick and the down shift rev matching feature made me feel like a 5 year old boy again, every single time.

What I loved most about the M2 was it’s simplicity. You simply got into it, pushed the start button, flicked it into Sport mode and away you go for hours or relentless driving power and fun. There aren’t any complicated switches and settings for transmission shift speeds or ridiculously complex driving modes, instead you just have one rocker switch to toggle between comfort, sport and sport plus.

And then there’s the design and aesthetic of the M2. I know this is down to personal preference and opinion, but I think the M2 is one of the nicest ever looking cars. It’s so chunky and aggressive from every single angle, it doesn’t ever seem to stop being loud and aggressive no matter what angle you approach it from. I used to constantly find myself looking back at the car as I walked away from it, it’s such a gorgeous looking car.

Before buying my M2 I test drove an M4, an M4 Competiiton pack no less. Whilst it was a stunning car, I decided against it for a couple of reasons. First of all, it just felt far too hard for every day driving. Each to their own here and I am well aware that some people will love that, but I just found the ride was too harsh on UK roads. The M4 sport seats looked absolutely stunning and like they belonged on a car racing around the Nurburgring, but in practice they were ridiculously hard and my derriere certainly didn’t appreciate them after a few minutes!

Arguably the biggest reason for me not buying the M4 however is that I simply felt that it wanted to kill me. That may sound dramatic and over the top, but at times it really did feel like it was about to hurtle you into the nearest hedge. I remember puting into full power mode (Which the way takes a good while to work out how to engage) and really planting my foot around some quiet twisty roads. Within minutes I had it back in standard driving mode because I nearly had a brown trouser moment!

I also thought the M2 sounded much better than the M4. The M4 has BMW’s S55 engine and almost every man and his dog will tell you that this engine is far superior to the lesser powered N55 unit found in the M2, but I just found it a bit…. bland? Soulless dare I say? The N55 in my M2 sounded utterly gorgeous, particularly on that first cold start of the day. I’m not sure the neighbours appreciated it but hey, that’s not my problem right!? When placed into sport plus the engine and exhaust really came to life, banging and popping on almost every press of the gas pedal.

I loved the M2, it’s one of the rare cars that I look back on and really yearn for and regret selling. I’m almost certain i’ll have another one at some point in the future.