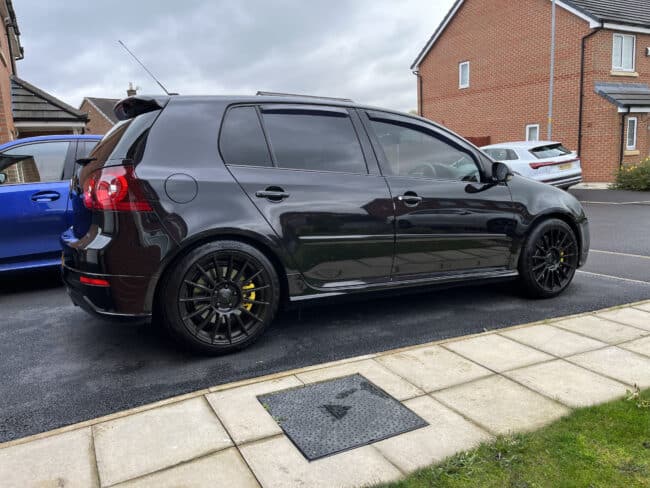 If you’re a car enthusiast like me, you’ll no doubt have heard that the Volkswagen Golf MK5 R32 is apparently the best in a long line of Golf’s ever produced. The main substance for that comment is due to the gorgeous 6 cylinder VR6 engine. After many years of yearning for one, I finally decided to bite the bullet and add one to my collection.

The MK5 version of the Golf turned out to be the last ever production of the R32, Volkswagen decided to replace it with the Golf R. Much to the dismay of petrol heads the world over, VW ditched the legendary 3.2 6 pot engine and replaced it with a 2.0 turbo charged 4 cylinder unit. Whilst those engines are extremely quick and deliver rapid acceleration, they just don’t generate the same level of theatre that a naturally aspirated 6 cylinder engine does.

So, what is so special about the 3.2 VR6 engine I hear you say? Well, it’s certainly not power related. The MK5 R32 produces an extremely modest 250 horse power which isn’t going to win any awards at your local track. It’s also not due to its ability to tune and modify the engine. It’s a 3.2 naturally aspirated engine – no turbo or supercharger to manipulate and gain power from here. Its reputation for excellence stems from one thing and one thing only – the noise it produces. I can feel myself getting weak at the knees just typing this… seriously. It’s an absolute masterpiece of an engine and the sound it produces is simply a symphony of noise. I have to say, I’ve owned plenty of 6 cylinder engines before (Mercedes, BMW, Audi etc), but none of them have come close to producing a sound as good as this. Maybe my BMW M2 did, I don’t know, but the sound of this R32 is absolutely exceptional and put’s a smile on my face whenever I drive it. I find myself grinning ear to ear about the sound even when just pottering around town and driving slowly.

My particular car is a DSG car (cue the angry manual lovers readying posts about buying the wrong car) and I personally love it. The early variants of the DSG transmission have a reputation for being a bit clunky and indecisive in town traffic, I can certainly see why people would say that. Sometimes in slow moving traffic, it’ll give me an occasional clunk or thud whilst down gearing or simply working out what to do next. All of that however is completely forgotten when pressing the loud pedal to the floor, the DSG really comes alive and behaves perfectly. The rev matching and burble that happens on downshift is quite simply epic, I find myself going out of my way to stay out on the roads longer and downshifting at every opportunity.

What’s the R32 like to live with and use as a daily? Well, I think it’s great. Granted, it’s not the most economical car to potter around town with, but I’d also argue that a modern diesel isn’t suited in any way shape or form to that type of commute. Modern diesels are incredible on fuel – but only if driven correctly. I’ve used the R32 for the school run on numerous occasions, it’s a breeze and just does exactly what you want it to. At the end of the day, behind the upgraded grill, exhaust and bumpers, it’s a Golf. That means it’s extremely practical and can be used for a range of applications. The beauty of the R32 is you can use it for pretty much any task and enjoy an incredible sound whilst you’re doing it – winner!

I’m on the verge of heading down the philosophical and potentially emotional road of talking about how our children won’t appreciate cars such as the R32 in this new, modern, electric car orientated world that we find ourselves in. I’ll save that for another day.

I’ll be writing about my R32 much more frequently but for now, I’m off out for a drive to put a smile on my face.