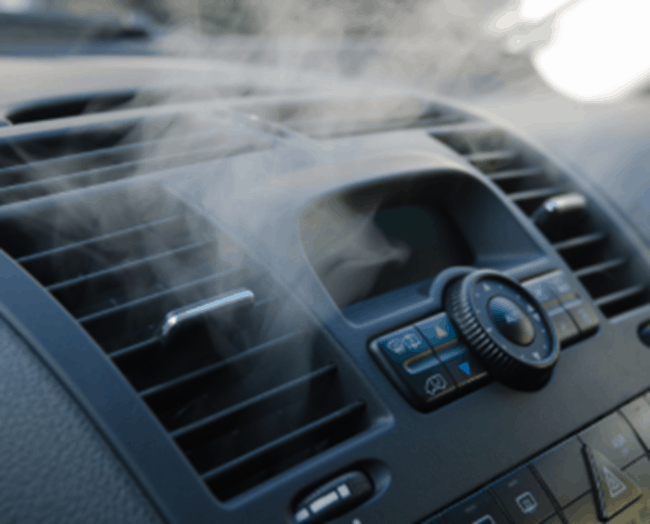 There’s arguably no better feeling that hopping into your car on a blistering hot day and being immediately chilled and cooled a crisp and clean air conditioning system. Within minutes, you’re immediately relaxed and chilled as your body is cooled down. Sounds like bliss, right?

In order to maintain that relaxing and purifying ability, air conditioning systems needs to be regularly cleaned and sanitised to ward off any nasty and untoward smells and bacteria which can quickly turn that pleasant journey into a distasteful one!

Not only can untoward odours and smells be highly offensive, the bacteria that produces those odours could actually be causing you serious health problems. It’s been scientifically proven that unclean air conditioning systems which contain bacteria build up etc, have dramatically increased hayfever symptoms, breathing and respiratory problems and much more.

As with any air conditioning system, over the years they eventually suffer from a build up of grime and bacteria in the system which can cause foul odours. It’s unfortunately an inevitability that the air conditoning system in your car will one day produce a nasty smell if left untreated.

Unfortunately, sometimes the smell isn’t solely caused the pollen filter, it’s bacteria and dirt which is trapped within the AC system. Condensation forms within the AC system and pipework which eventually leads to bacteria forming and growing if left untreated. This is why it’s extremely important to regularly use a car air conditioning cleaner to ensure that the system is kept clean and performing at its best.

Autoglym produce some exceptional car care products and their Air-Con cleaner is absolutely no exception. The British car care giants have years and years of experience to call upon and not only that, they have officially been awarded a British royal warrant – impressive stuff! In summary, Autoglym Air-Con cleaner gets our number one spot because of it’s superb performance and benefits such as;

Is It Important To Keep An Air Conditioning System Clean?

It’s vitally important to keep an air conditioning system clean as failure to do so can result in a whole host of problems, most alarmingly, health problems. If your air conditoning system isn’t maintained and used regularly, you’ll very quickly end up with condensation in the system with can then lead to damp. That damp air is then what you’ll be breathing in whilst driving. This can then lead to respiratory problems, hayfever etc. Really nasty stuff and certainly to be avoided. If you spend a lot of time in your car and value your health then it’s certainly wise to consider treating your AC system to a clean.

How Do Air Conditioning Cleaners Work?

Air con cleaners work penetrating and disinfecting the AC system. They are specifially desgined to combat and destory bacteria, dirt and grime which is commonly found in air conditioning systems. Most AC systems suffer from bacteria and dirt build up due to lack of use. Our advice would be to use the air conditioning system as regularly as possible. This will reduce the potential build up of condensation and bacteria.

The majority of car air conditoning cleaners are in aerosol format which makes them extremely easy and convenient to use. Once activated, the aerosol can will run until it’s entirely empty and will work it’s way through the entire AC system. When the aerosol comes into contact with bacteria within the AC system, it’ll begin breaking it down and neutralising it, thus removing the nasty odours you’ve been subjected to.

Some air conditioning cleaners will come in a foaming format with a tube attachment which is then directed into each air vent. Once the foam has been sprayed into the air vents, the solution begins breaking down any dirt and grime as well as bacteria to ensure that the vents are completely clean.

How Do I Use An Air Conditioning Cleaner?

This will ofcourse be very much dependant on the type of cleaner that you buy, most systems will be an aerosol tin which will activate and run itself entirely empty once opened. In this instance, it’s really simple to use.

First of all, you’ll want to start the car and have the air conditioning system in operation. It’s really important to ensure that the AC is turned on and active. It’s also imperative to have the system in “recirculation” mode

Once the can has emptied entirely and all of the aerosol has evaporated, switch off the car and allow the car to vent for a period of time. Again, this will be different per manufacturer and product so be sure to follow the instructions fully.

This is a really important point and kind of goes without saying but you must ensure that your vehicle is not left unattended whilst you’re carrying out the procedure as you could end up having your car stolen!

How Often Should I Use A Car Air Conditioning Cleaner?

Our advice would be to use a car air conditioning cleaner atleast every 6 months. One key thing to bare in mind here is the frequency at which you use the AC system in your car. You’ll hear lots of people stating that they don’t use the air conditioning in their car as it uses too much petrol! This is somewhat of an urban myth and is actually extremely detramental to the system. Failure to regularly use the AC system will result in two things happening.

Regular use of an air conditioning cleaner will ensure that any bacteria within the system is neutralised and killed off accordingly.

Q. Why does the AC have to be in recirculation mode when using a cleaner?

Q. Can I be inside the car whilst using the air conditioning cleaner?

A. No, you musn’t be inside the car whilst using the cleaner. The car needs to be completely sealed and stationery for the period of time whilst the cleaner is in operation