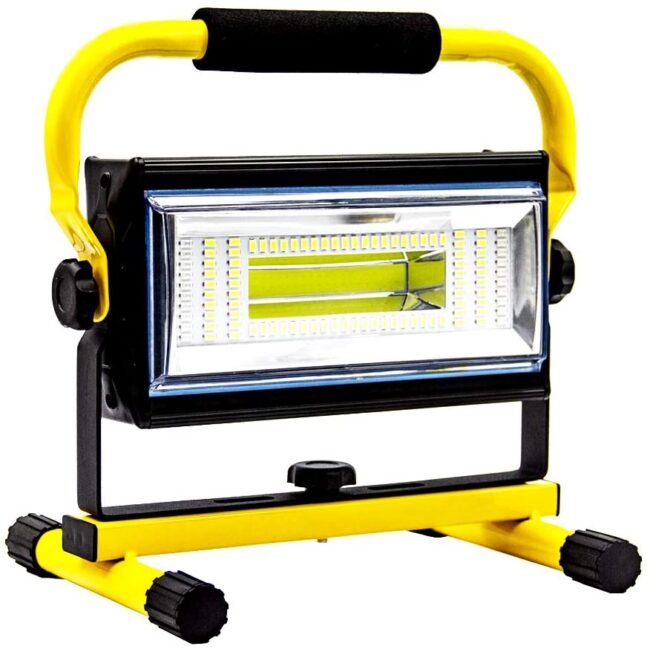 Tired of working in the dark and struggling? There’s nothing more frustrating than working in low light conditions, it’s a bit of a nightmare and makes things almost impossible at times. We take a look at the best LED work lights to keep your work area bright and visible making jobs so much easier.

Are you in a rush and would like an overview of our best picks? No problem

The Trongle LED Rechargeable Work Light takes our top spot due to it’s excellent performance and incredible value for money.

It provides 30w of portable lighting and outputs an impressive 2000 lumens to keep your work area nice and bright, naturally an important consideration for any work light.

It’s also iP65 rated which means it’s safe for use outdoors in wet conditions. This means you aren’t restricted weather conditions and can continue your work even if it’s raining outside.

Incorporated into the design is a 180 degree adjustable stand at the back of the work light. This allows you to position and manipulate the light in a number of different ways allowing you to direct the light at the exact location that it’s needed.

Recharging is a doddle, it’s charged via USB. Simply attach a USB cable to the back of the light and plug it into an outlet and it’ll recharge the batteries. Impressively, it also has a reverse charging socket which allows the light to charge up other devices. For example, your phone many be low on battery power and you don’t have access to a wall socket to charge it, simply plug the USB cable into the socket of the LED work light and it’ll charge your phone up. This can be used to charge other items such as headphones etc.

The key features of the Trongle LED Rechargeable Work Light are;

The Runacc LED Rechargeable Work Light came a close second but is a more than capable runner up boasting some impressive features.

First of all, it features a superb 360 degree folding and rotating system. Incorporated into the design is two, 10W COB lights which can be configured to light up two opposite directions at once due to it’s unique folding system. Each LED produces an impressive 1500 lumens of light to ensure superb coverage.

It also has an extremely impressive built in battery, 5000mah to be precise. This results in a whopping 8 hours run time from a single charge when using one light or 5 hours when using both lights simultaneously.

Another excellent feature of this LED work light is that it can be used as a power bank to charge up other devices such as your mobile phone, headphones etc. Simply plug your device into the USB port on the rear of the light and it’s charge up at a steady rate of 1A, this can be extremely handy when out and about.

A double bracket handle system allows for extreme durability and allows the unit to easily be carried and also positioned in a range of different ways when working with the light.

The key features of the Runacc LED Rechargeable Work Light are;

The Sylstar COB LED Work Light is capable of producing a whoppping 7000 lumens of light and contains a ginormous 14400 mAh rechargeable battery! It’s a powerhouse of an LED work light and will provide huge amounts of light for extended periods of time without problem. To be precise, it’ll run for an incredible 10 hours off a single charge, seriously impressive.

It’s also IP65 rated which means it’s waterproof and fit for use outside, even if it’s raining.

A 360 degree rotating design allows you to direct the light at the exact place that you need it and makes it extremely easy to work with. This makes it great for use when underneath vehicles etc.

It can also act as a power bank should you need to charge up other devices such as your mobile phone, headphones, or any other USB accessories. It’s huge 14400mah battery makes light work of charging up other devices.

With a choice of 6 different brightness levels you’re able to tailor the brightness and power of the light exactly as you need it.

In summary, it’s a lightweight but extremely powerful LED worklight which can produce a huge 7000 lumens of power for up to 10 hours straight, a really impressive bit of kit.

The key features of the Sylstar COB LED Work Light are;

Why Choose An LED Work Light?

LED (Light Emitting Diode) technology has improved dramatically over the past few years and now features in a magnitude of different products. LED technology as been around since the mid 60’s but the initial technology wasn’t great and often failed very easily. That isn’t the case anymore, they are bright, powerful and run remarkably cool in comparison to traditional bulb tech.

All modern cars used LED technology for their headlights, interior bulbs, tail lights and so much more. LED’s are used so extensively nowadays because of their exceptional performance and power but also because of their incredible efficiency.

Efficiency – In comparison to traditional halogen bulbs, an LED can use up to 80% less power, that’s a pretty remarkable feat. What’s even more remarkable is the fact that they do this whilst producing much more light at the same time, they are seriously impressive.

Increased Brightness – A good quality LED light will always produce much more light and brightness than that of it’s halogen counterpart. This can be extremely important, particularly when working on a vehicle. For example, you may be working in the engine bay and need to focus the light far down towards the bottom of the engine bay, an LED light is going to provide much more light in this situation than a traditional halogen system.

Instant Light – An LED will illuminate at full power the very second it’s powered on providing the ability to get to work straight away. Older bulb technology such as halogen requires a period of time to warm up and reach full power before being at it’s most powerful.

Cool Running Temperature – LED bulbs operate at a much lower temperature than traditional halogen bulbs. Halogen work lights get extremely hot once they’ve been powered on for a while and can be extremely dangerous and may inflict burns. It’s an extremely unpleasant experience when you idavertently touch a piping hot halogen work light, believe us, we know! LED works lights are free from this problem and opereate at a much safer, cooler temperature.

Choosing an LED work light can be a little bit confusing with so much choice and options available, be sure to consider these key factors when making your decision

Brightness – One of the biggest considerations is the brightness that the LED work light is able to produce. This is ofcourse going to be relative to what you plan on using the light for but as a guide, if you’re going to be using it to illuminate a completely pitch black room or area you’ll want to go for something between 2500 – 5000 lumens. If you’re going to be using it in a fairly well lit room but need a little bit more light in tight areas, something as low as 250 – 500 lumens should do the trick.

Size and Dimension – Again, this is completely relative to what your plans for the work light are but it’s an important consideration nontheless. You may opt to purchase a work light on a large stand that can be used for peering over an engine bay when repairing a car which would be great for that particular task but not ideal for use in a small confined area such as underneath a kitchen cupboard etc. We think portable hand held LED work lights are great as in the main, they are extremely flexible and can be used for a range of different applications.

Charging – Consider the charging and re-charging method of the LED work light that you’re about to buy. Some LED lights will run off conventional batteries which can’t be recharged and require replacement one they are out of juice. Most modern LED work lights now feature rechargeable batteries and can be re charged using a USB socket which is integreated into the unit. This would be our recommendation, they work great and offer extreme ease of use and convenience. Also, some LED work lights will feature the ability to use it as a power bank source to charge up another item such as a mobile phone, headphones etc. This is a really useful feature and can help massively.

Price – An extremely important consideration for any purchase is the price. Spend more money and you’ll get a much more powerful LED work light which will likely have a bigger capacity battery, thus lasting longer. If you’re going to be using your work light for extended periods of time, it may be worth investing in one with a bigger capacity battery. If you’re only likely to be using it for short periods at a time, a cheaper unit may be perfect for your requirements.

A. Generally speaking, no, an LED work light won’t overheat but it is possible. Always adhere to best practice and keep the work light away from flammable objects and never use it for a large extended period of time.

Q. Are LED lights better for the environment?

A. Yes, compared to halogen lights, LED are much better for the environment as they are a lot less harmful.